U.S. Envelope Styles and Sizes
There are plenty of envelope types and sizes available - they differ by size, flap type, may have windows. Below describes the most important types of envelopes used in the United States. International envelope standards may differ.

Construction
This picture illustrates various parts of an envelope. The variations of these parts create different envelope styles. 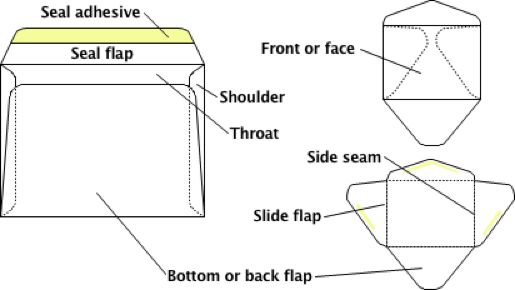 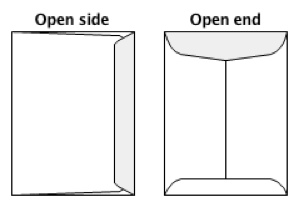 Flap Styles
The flap is the part of the envelope that is folded to seal the envelope. The main flap shapes are shown in the illustration.

Sizes and Styles
There are two main envelope standard systems we're going to review. The first is used in the USA (US envelopes are also often known as Standard), the other is the ISO metric system used in Europe and many other parts of the world. The envelope sizes may vary from tiny to huge, and there are dozens of them of sizes available. Though you'll hardly use more than 4-5 most common sizes in your everyday practice, it's a good to have an understanding of other possible styles and sizes.

Standard (US)
The US (or Standard) envelopes are divided in several groups by their style and application. The sizes are listed in inches, the shortest dimension first.

Commercial
These are the most popular envelopes for business correspondence, that we send and receive every day. They usually have commercial flap.
They are mostly used for letterheads, invoices, statements, checks, writing stationery and direct marketing mailings.

Note: The 7 3/4 envelope with pointed flap is also known as Monarch.

Baronial
These are more formal envelopes, are deeper and typically use a pointed flap. They are popular for invitations.

Booklet
These envelopes are mostly used for sending catalogs, folders and the like.

Catalog
This style of envelope is mainly used for catalogs, magazines and reports.

There are also Metal Clasp, Coins, and probably other styles, which are not listed here because they are either rare, too small or too large, or not suitable for printing (such as Metal Clasp).

Window Envelopes (US)
Window envelopes are most often used for bills, though they're also popular for marketing purposes. They are cost-efficient, since the name and address shows through the window, eliminating the need to address the envelope. Normally translucent plastic is used as the window material. Open window envelopes are growing in popularity as more environmentally friendly, however, they are less secure.

Single-Window Envelopes
Theoretically, nearly each envelope type and size may have a window, this generally depends on the manufacturer. The most common (and recommended by USPS) window size is 1 1/8 x 4 1/2, and the position 7/8 in from left and 1/2 (often 5/8) in from bottom, but there are lots of variations. 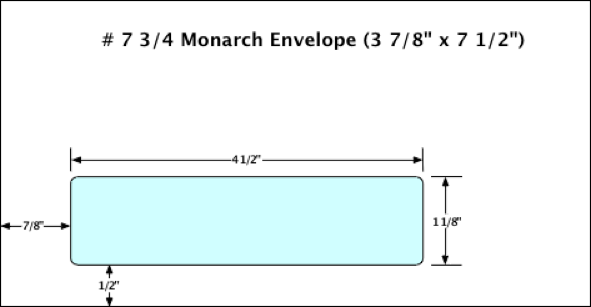 Double-Window Envelopes
Such envelopes are often used for checks and invoices. The three probably most popular envelope sizes with double windows are:

Note: The sizes and positions of windows may vary greatly, and depending on the manufacturer. There are no standards for these (at least which we are aware of).

ISO Envelope Standards
These envelopes are widely used all over the world. The C series was designed to accommodate ISO A paper sizes (see The ISO Paper Size Concept by Markus Kuhn). For example, a C5 envelope will accommodate an A5 sheet flat or an A4 folded once. The B series is an alternative, and is much less common than the C series. The sizes are provided in millimeters and in inches (for reference).

Note: Although DL is not part of the ISO C series, it is a very widely used standard size.

Window Envelopes
There are no international standards yet for window envelopes.

Addressing and Printing Guidelines
The correct formatting and address position on an envelope is required to facilitate mail processing by optical character recognition equipment, used by many postal services for sorting mail. Machine-readable mail can be sorted automatically, rather than by a human, which results in faster and more accurate delivery.

Here is the picture that illustrates the correct address position: 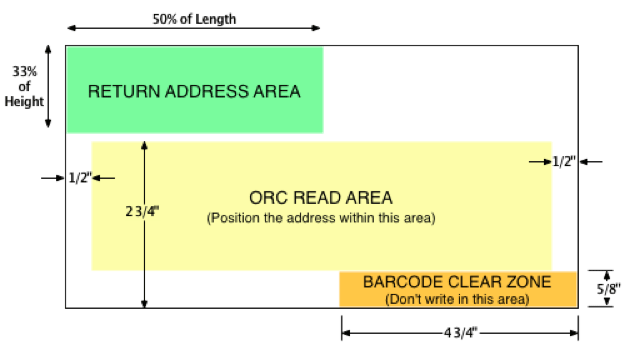 When printing addresses on envelopes or labels, it's recommended that you use a laser printer - ink from inkjet printers is susceptible to moisture, and the address may get blurred or even completely unreadable on the way. However, don't print on window envelopes with laser printers - the window material will melt because of the contact with the printer's heating element